The GMO crisis in Swaziland… 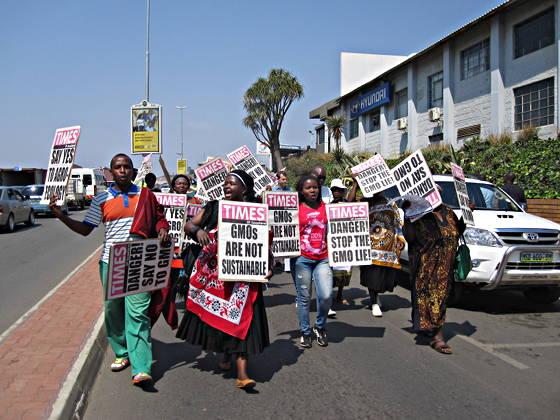 By Tsakasile Dlamini
Participatory Ecological Land Use Management (Pelum) Swaziland Country Coordinator
October 2017
Swaziland is under enormous pressure to introduce genetically modified organisms (GMOs) into the country’s farming system. This pressure is coming not only from Monsanto but also from farmers and some sections of the public who have been fed a great deal of misinformation and hype by the pro-biotech machinery. The farmers, acting on incomplete and often unsubstantiated information, are pushing for the adoption of genetically modified (GM) cotton, in the hope that it will give them greater yields, while reducing the costs of production.

Currently, according to Swaziland’s legislation, to import GM products or live GMOs (seeds) one needs to apply for a permit; a lengthy process that requires evidence that the GMO in question is safe. However, it is an open secret that farmers are bringing GM cotton and maize seed into the country illegally from South Africa because they have been informed that GM-based farming is more cost effective. It is unfortunate that a majority of our cotton farmers are told disingenuously about the “great yields and benefits” of GM cotton and not about the dangers associated with this technology. There is a serious lack of accurate information that would enable them to make informed decisions.
The biggest problem with introducing Bt cotton into Swaziland is that it only controls one pest – the bollworm – and doesn’t solve the other problems cotton farmers face in this country. For example, there is a serious shortage of water in the Lubombo region, where a majority of cotton farming takes place. Even with Bt cotton, farmers will still face water shortages, low cotton prices, secondary pests and – worse yet – resistant bollworms that will now require even more expensive and toxic sprays. In fact, Bt cotton will prove to be a more expensive and unsustainable option for cotton growing farmers.

PELUM has published articles in an effort to educate the public about the dangers of GMOs.

The Swaziland Cotton Board has made no effort to explore effective organic pest control measures, which could be sustainable economically and ecologically in the long term. Organic cotton also fetches a premium price at the market, a factor that is not being adequately shared with cotton farmers in Swaziland.
Furthermore, the Swaziland Environment Authority (SEA) has allowed the Swaziland Cotton Board to conduct confined field trials at several sites in the country, where they are growing BT cotton to test whether it is suitable for release into the environment. PELUM was once invited to view these “amazing” Bt cotton fields, and what we saw was a crop heavily infested with mealy bugs. So, the bollworm may have been temporarily controlled but what came next was a wave of secondary pests that threatened the performance of the GM cotton. The farmers were not told that in almost every country that has adopted Bt cotton, secondary pests have become a major problem.
In fact, incomplete data in a report on the confined field trials has been used as the basis for an application for permission to commercially grow Bt cotton in the country, which the Swaziland Cotton Board submitted to the SEA. The report doesn’t include any information about secondary pests (such as jassid infestation) that became a problem in some of the fields). It also carries no data on the effects of Bt cotton on soil quality. Were any changes brought about? The trials seem to have focused only on yield potential and adaptability of the two Indian varieties (JKAL 1947 and JKCH 1050).

PELUM Swaziland and its partners have made quite a lot of noise about this application, publishing articles in the media, submitting objection letters to the SEA and coming together to march to the SEA offices and deliver petitions to the SEA signed by farmers against the introduction of GM cotton in the country. Thirty people joined the march and delivered a petition with over 80 signatures on 15 September 2017, followed by another petition signed by 101 farmers, which was delivered on 30 September 2017.
What is worse is that industry and the Swaziland Cotton Board have lobbied legislators to support amendments to our Biosafety Act, in order to weaken the law. The legislators were taken on a “LEARNING” visit to South Africa (11 May 2016) and India (13–19 November 2016) where they were shown the “success” of Bt cotton and just how much Swaziland would also benefit if the crops were commercially released in the country. They were then informed that the Biosafety Act of 2012 is too strict and not conducive for the GMO companies to conduct business with farmers in Swaziland. An amendment of the strict liability and redress clause was proposed as the only way to ensure that farmers would have access to GM seeds. However, farmers did not realise that the amendment would also make it easier for GM companies to conduct business in the country, while stripping them of any protection from damage and loss as a result of this technology, as has already occurred in Burkina Faso.

To the best of my knowledge, the proposed amendments to the Biosafety Act of 2012 have not yet been adopted, as Parliament has not conducted a public consultation or validation workshop. As part of civil society, PELUM and its partners, Africa Centre for Biodiversity (ACB) and Third World Network (TWN), are eagerly awaiting such a workshop, where we will submit our objections to the proposed amendments.

PELUM organised a workshop for civil society on GMOs and biosafety issues, in partnership with Africa Centre for Biodiversity (ACB) and Third World Network (TWN).

The applications by the Swaziland Cotton Board and Nisela Farm for commercial release of Bt cotton, currently under review by the National Biosafety Advisory Committee, propose to roll out the GM cottonseed to all interested cotton farmers across the country, without even a proper assessment or database of the location of these farmers’ fields. This goes against the “precautionary approach” of the Biosafety Act and the Cartagena Protocol to which Swaziland is a Party.

There is an urgent need to create awareness on the dangers of this technology, as well as the possible alternatives that farmers should rather be exploring; in particular, agroecology.

PELUM Swaziland and its partners marched to the SEA offices to deliver objection letters and petitions signed by farmers, urging SEA not to grant the Swaziland Cotton Board permission to grow Bt cotton